Matthew 28:6
He is not here: for he is risen as he said, Come, see the place where the Lord lay.

There is no one in that tomb.

We read a while back that at some sort of regional meeting of Bible schools that professors from 9 different prominent Bible seminaries plainly said they did not believe in a bodily, physical resurrection of Jesus, but only a spiritual one.
If that be the case, then they don't believe the Bible.

In Luke 24:39 Jesus said, "A spirit hath not flesh and bone as you see me have."
Paul said if he be not resurrected then our preaching is in vain.

Friends, he is risen; spiritually, physically, totally.
Victory over death and hell. Jesus won a complete victory, and he made a path for us to follow.

I want to tell you today that when Jesus came out of that tomb, an awesome power was delivered unto the world.

Resurrection power didn't stop when Jesus came out of the tomb. It came forth in fulness.

Paul wrote in Philippians 3:10, "That I may know him and the power of his resurrection."

At the name of Jesus demons flee, because the tomb is empty.

Men and women lost in sin and bound in chains of despair can become a new creature, born again by that resurrection power, because the tomb is empty.

Resurrection power is alive and working every day.

The tomb became empty so that the temple could be filled.

What I am trying to say is that when the stone was rolled away for Jesus it was also rolled away for all who would believe on him.
Because of the total victory of Jesus at the cross and at the tomb, all who are dead in trespass and sin can be resurrected, born again, created a new creature in the newness of life.
Also the flesh is going to be glorified and raised up.

The resurrection power of God is able to not only give you new life spiritually, but it is also able to lift up your natural life; to meet your needs in the natural realm. If Jesus had not resurrected spiritually and physically, this would not be so.

According to my Bible the curse of the law not only fell on the spirit but also the flesh. Mostly the flesh. These were spiritually dead men.

Jesus suffered in the spirit and in the flesh to redeem me from the curse. Sickness, disease and poverty came because of sin.

Adam knew no fear until he sinned.
Is that right?

Ephesians 1:7 says, "In whom we have redemption through his blood, the forgiveness of sins according to the riches of his grace.

Ephesians 2:5-6 says, "Even when we were dead in sins: hath quickened us together with Christ, (by grace are ye saved) and hath raised us up together and made us sit together in heavenly places in Christ Jesus.

Resurrection power came not only on Jesus, but on all that would believe.
When His stone was rolled away, so was yours.
The stone wasn't rolled away so Jesus could get out, but so we could get in, body, spirit, and soul.
Romans 6:4-5 says, "Therefore we are buried with him by baptism into death; that like as Christ was raised up from the dead by the glory of the Father even so we also should walk in newness of life. For if we have been planted together in the likeness of his death we shall be also in the likeness of his resurrection.

Raised up with power over sin with the ability to refuse the devil, and the power to back it up. Delivered from the power of darkness. Also with the freedom to make the choice.

I believe maybe Job said it best.
Job 19:25-26 says, "For I know that my Redeemer liveth, and that he shall stand at the latter day upon the earth and though after my skin worms destroy this body yet in my flesh shall I see God.
I thank God for all that Jesus did for me at Calvary, and I thank my Lord today that the tomb is empty and the stone is rolled away. The curtain is rent and the separation between is no more.

Have you received the resurrection power of God into your life?
Do you need a new start?
You can have it now. 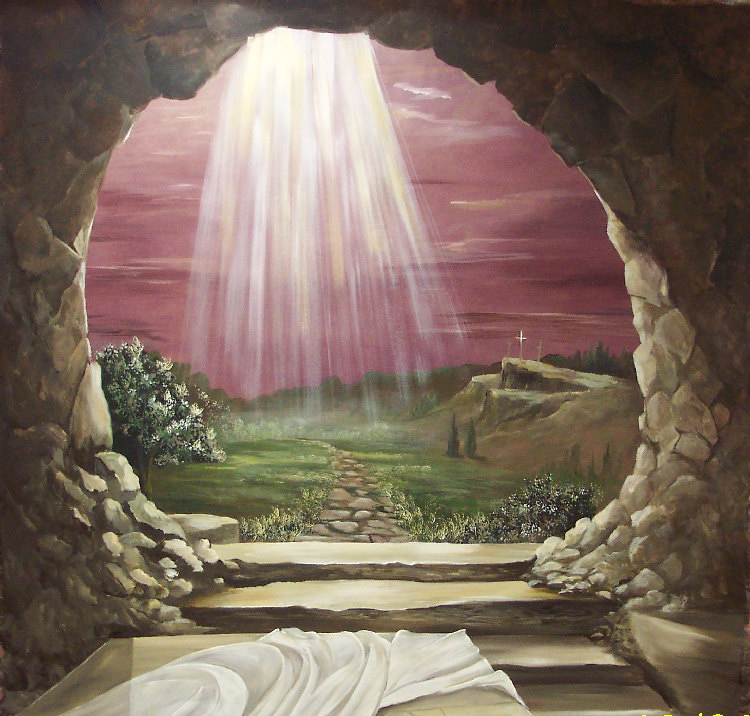 THE  TOMB  IS  EMPTY