1 Peter 1:18-19 Forasmuch as ye know that ye were not redeemed with corruptible things, as silver and gold, from your vain conversation received by tradition from your fathers; But with the precious blood of Christ, as of a lamb without blemish and without spot.

Isaiah 53:4-6 Surely he hath borne our griefs, and carried our sorrows: yet we did esteem him stricken, smitten of God, and afflicted. But he was wounded for our transgressions, he was bruised for our iniquities: the chastisement of our peace was upon him; and with his stripes we are healed. All we like sheep have gone astray; we have turned every one to his own way; and the LORD hath laid on him the iniquity of us all.

Matthew 8:17 That it might be fulfilled which was spoken by Esaias the prophet, saying, Himself took our infirmities, and bare our sicknesses.

With these scriptures in mind we turn to 1 Corinthians 11:23-25, where we find the Apostle Paul explaining to a New Testament Church that the meaning of Passover has changed. The text says: For I have received of the Lord that which also I delivered unto you, That the Lord Jesus the same night in which he was betrayed took bread: And when he had given thanks, he brake it, and said, Take, eat: this is my body, which is broken for you: this do in remembrance of me. After the same manner also he took the cup, when he had supped, saying, This cup is the new testament in my blood: this do ye, as oft as ye drink it, in remembrance of me.

Jesus said to His disciples at Passover, "As oft as ye do this do it in rememberance of Me".
He was telling them about a change.

When the people of Isreal celebrated Passover they were remembering that night back in Egypt when the Lord passed through and smote the firstborn of all who had not put the blood of a lamb on the door post (Exodus 12:12-12:29).

Jesus was telling his disciples I am about to become the Passover Lamb that will be given for you so that death can pass you by once and for all and you can have life eternal.
Remember when John the Baptist saw Jesus he said: John 1:29 Behold the Lamb of God, which taketh away the sin of the world.

Jesus said, remember me and so as we come together to celebrate the Glorious Resurrection of our Savior I thought it would be good to call some things to rememberance, because sometimes even though we celebrate we can be forgetful about some things.
The Resurrection was the culmination of his finished work. Jesus conquered the three greatest enemies of mankind: SIN, SATAN,and DEATH.

Let's start by remembering why he died in such a way.
We find the first part of our answer in our text in Isaiah.
Isaiah 53:4-6 Surely he hath borne our griefs, and carried our sorrows: yet we did esteem him stricken, smitten of God, and afflicted. But he was wounded for our transgressions, he was bruised for our iniquities: the chastisement of our peace was upon him; and with his stripes we are healed. All we like sheep have gone astray; we have turned every one to his own way; and the LORD hath laid on him the iniquity of us all.

Notice the contrast between He and our. This stanza of the text reports that although "we" did not recognize it at first, the sufferings of the Servant were not His own fault, as "we" thought, but were in fact the result of "our" sins, and resulted in "our" healing. The Servant is indeed characterized by griefs and sorrows, but they were not His own. It was all for us that He suffered and died!

In our society today people have the mentality that they do not need Jesus because they are too good to need a Savior or they feel that they can follow the path of their choosing to heaven.
Let me share something with you.
We were born into Adam's sin the only way to heaven is to be reborn into Jesus's victory.
If you were ok and I was ok then Jesus wouldn't have had to suffer in our place.

That’s the grace of God in our lives. Jesus took our sin upon Himself and did what we couldn’t do. We stand forgiven and bask sheepishly triumphant in Jesus’ glory.

2 Corinthians 5:21 He made Him who knew no sin to be sin on our behalf, so that we might become the righteousness of God in Him.

We should never forget that the sin He bore and the pain He suffered was ours.

Why did He do it?
Galatians 4:4 But when the fulness of the time was come, God sent forth his Son, made of a woman, made under the law,
Ga 4:5 To redeem them that were under the law, that we might receive the adoption of sons.
Ga 4:6 And because ye are sons, God hath sent forth the Spirit of his Son into your hearts, crying, Abba, Father.
Ga 4:7 Wherefore thou art no more a servant, but a son; and if a son, then an heir of God through Christ.

We should never forget that included in the awful cost was the price of our adoption as sons and daughters of God.
Jesus won the victory, but sometimes we forget what He won.

REDEMPTION
Colossians 1:12-14 Giving thanks unto the Father, which hath made us meet to be partakers of the inheritance of the saints in light: Who hath delivered us from the power of darkness, and hath translated us into the kingdom of his dear Son: In whom we have redemption through his blood, even the forgiveness of sins:
Colossians 2:13-15 And you, being dead in your sins and the uncircumcision of your flesh, hath he quickened together with him, having forgiven you all trespasses Blotting out the handwriting of ordinances that was against us, which was contrary to us, and took it out of the way, nailing it to his cross; And having spoiled principalities and powers, he made a show of them openly, triumphing over them in it.

Jesus disarmed the principalities and powers and made a public example of them, triumphing over them. This is the great news of the cross: What man lost, Jesus regained, and gave the authority back to us.

I want to share an experience from my own life with you and then I will close.
I had tried everything to quit smoking.  Our pastor's wife told me something that changed my life.  She said, "Dave, I want you to see Jesus on that cross, and with Him on that cross, I want you to see a pack of Marlboros."
Nothing worked till I saw those cigarettes nailed to His cross, and realized Jesus had already defeated them in my place. I never smoked again.

Jesus said, "Remember Me",and I believe we need to remember Him and His suffering and His victory, not just at Easter or Passover but every day, in every trial, in all our ways.
Remember Him as The Lamb, The Lion,The King.

Have you been reborn into Jesus' victory or are you still trapped in sin?
Freedom and everlasting life are one prayer away.
Are you fearful?
You don't need to be.
Do you need a change?
The resurrection power that was released when Jesus came forth from the grave is still alive and he has the power to declair you a new life today.
Easter Message:
The Passover Lamb

Jesus is the:
Lamb Of God
Lion  Of  Judah
King of Kings
Lord of Lords 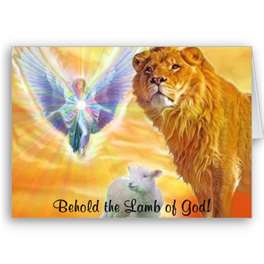