2 Corinthians 5:17 Therefore if any man be in Christ, he is a new creature: old things are passed away; behold, all things are become new.
Exodus 12:2 This month shall be unto you the beginning of months: it shall be the first month of the year to you.
Isaiah 43:18 Remember ye not the former things, neither consider the things of old.
Isa 43:19 Behold, I will do a new thing; now it shall spring forth; shall ye not know it? I will even make a way in the wilderness, and rivers in the desert.

You see we can't alter where we have been, only where we are going.

These scriptures tell us that when we are Born Again, there is a breaking away from the past, a release from old bondages. Old things are passed away.
Sometimes in life we become enslaved to things that we really don't want anymore, but we have been in bondage to them so long it becomes a part of our life. I smoked for a long time after I really didn't want to anymore. But God has the power to release you.

You can't alter your yesterday! You can't change the way you were raised. You can't change what addictions have done to your health. You can't change the feeling that personal abuse has left in your heart. BUT GOD CAN! He can cause old things to pass away. He is not bound by clocks or calendars. But there has to be a new birth and a burial.
Alot of Christians believe that the old man is dead, but they are still dragging around the corpse. Some of us have come forth like Lazarus, still bound in some grave clothes, still dragging around old hurts and unforgiveness of the past, or worse yet dragging around someone else's past. What I mean by that is people who won't come to church because of what someone else did in their past.

Here is the thing: Jesus has released you from your past, but you will have to claim your victory.
Israel had to leave Egypt.

In II Samuel chapter 9, there is the account of Mephibosheth, Jonathan's son. He was living in Lodebar (a place with no pasture) like a pauper, when he was an heir to the king. David found him and brought him to the palace, but he couldn't run back and forth from Lodebar to the king's table.

I believe some of us are stuck in or maybe at times run back to Lodebar. Maybe a Lodebar of old habits, or maybe old hurts, or old feelings of depression, self-pity, or failure.  But Jesus has empowered us and called us to leave old Lodebar. The trouble is we are eating too many meals away from the King's table.

If you have become a new creature in Christ you have been made spiritually alive and your spiritual diet has to change.
You can't plant a watermelon and when it comes up water it with kerosene.
I am not trying to scold you. I am trying to show you the way to a new beginning in Christ Jesus.

I feel like some of you have messed up and now you want to give up. There is a God-given opportunity to those who have messed up in their lives a chance to erase the past and shape the future leaving all our old failures behind.

Our opening text (II Corinthians 5:17) said, If any man be in Christ he is a new creature. And as that new creature, you can call God your Father. All things are possible to you.  The greater one dwells in you. You have a new destiny.  In every trial and temptation you have a way of escape.

Old things have passed away, things like: Alcoholism, Inherited sickness, Generational curses, Addictions, Depression, Fear, Bitterness, Unforgiveness, etc.  You have been released. Now it's time for you to surrender and let go. Let go of old hurts and old life styles, and as Romans 6:4 says, walk in the newness of life.

I want to let you in on something. It doesn't matter what other people think about you or for that matter even what you think of yourself.  Jesus loves you.  He gave His life for you so that you could have life and have it more abundantly.
He died so that you and I could have a new beginning.

Before Israel could leave the bondage of Egypt a lamb was slain.  Before you and I could go free a Lamb was slain.
Jesus was that Lamb.

Well, you don't need to give up. You just need to look up.

Is your life hid in Christ?

There is only one way to be in Christ. You must be Born Again. Being a new church member is not enough. You must become a new creature in Christ.
It all begins at a place of: Repentance - death Baptism - Burial Holy Ghost - Resurrection. 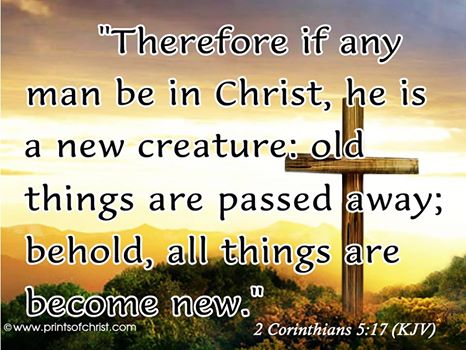